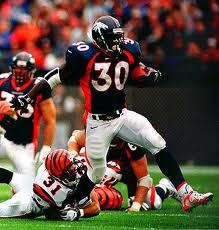 It’s that time of year again. The greatest players in the NFL are inducted into the Pro Football Hall of Fame. I’ve asked hundreds of NFL fans their opinions of Terrell Davis. The majority (75%) of them do not believe he is a Hall of Fame player. Davis has been eligible for the Hall for nearly a decade now. The arguments against him are mostly weak. In a vacuum, Terrell Davis was as good as any back I’ve ever seen. He was patient, punishing, and could take it to the house on any play. He was milked in pressure moments and he thrived in the role. He was the best player in pro football for three seasons and led the Denver Broncos to back to back NFL Championships. There can be a case made that Davis is the best running back in post season history.

HE DID NOT PLAY LONG ENOUGH?

He was only at his best and most healthy four of his seven seasons. Terrell played in 78 regular season games (10 more than genius runner Gale Sayers). Bill Walton got very little out of his body but has received an amazing amount of credit because of his best level of play. Bo Jackson is fawned over by fans for his amazing abilities and for what he could have been. Bo played in 38 NFL games. Davis somehow gets looked past, even though he actually did achieve dreamy things. Understanding his career was short, he’s waited long enough for Canton to call. I understand the value of longevity. In the end it’s the quality that counts more than the quantity.

WHAT DAVIS GOT DONE IN HIS REGULAR SEASON CAREER:

Davis was named to the NFL 1990’s All-Decade Team.

His 97.5 yards per game average is fourth best all time. He trails only Jim Brown, Barry Sanders, and Adrian Peterson.

Over his best three seasons, the Broncos were 39-9 in regular season games.

His 2,476 regular season and playoff rushing yards combined in 1998 are the top mark in league history.

Impressive as those things are, it was the playoffs where Terrell really made good use of his time.

In eight post season games Terrell Davis averaged a stunning 143 yards on a 5.6 yards per carry average. He had seven straight 100 yard plus performances in which Denver won every game in that stretch. Davis also scored 12 times.

He was the best player on two Super Bowl winning teams. In the first one he rushed for 157 yards and scored three touchdowns, in only three-quarters while suffering a migraine. He was named the Super Bowl MVP. Terrell also had over 100 yards rushing and 50 receiving as the Broncos defeated the Falcons in Super Bowl 32.

HOW ABOUT THE BACKS THAT FOLLOWED HIM WHO HAD SUCCESS?

Yes he played with a nasty, agile, offensive line. He played with a great QB, and a host of other key names. So what? Every champion needed help, and Davis needed it less than most. He was the best player in the sport, let alone his team.

It’s true that Mike Anderson was a good NFL player who had an outstanding season as a feature back in the year 2000. In 2005 Rueben Droughns had a solid 1,232 yards (4.0 ypc) and two touchdowns. I liked a guy named Olandis Gary. He stung people when he ran. He added 1,159 yards in only 12 games in 1999. Clinton Portis was going to be good for any team in any era. Alex Gibbs coached up some fine offensive lines. This does not change that Davis was the driving force behind his teams rings. It was “TD” who rushed for 199 yards in a playoff game and broke 47 Denver Bronco club records. Other backs having some moments does not change the legacy of number 30.

I’m hearing a lot of chatter about other players with potential to get voted in. Terrell Davis belongs in the Hall of Fame. The level he attained and how it contributed to team success is way more of a positive than his short career is a negative. The football public somehow missed out on a guy who is closer to a legend then someone who should be begging for votes.