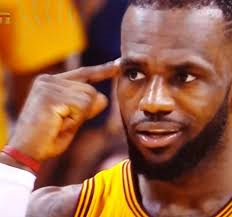 These LeBron James decisions have become familiar, massive television events. The delivery is getting smoother and the choices are getting better. The story broke last night. Four years, 153.3 million dollars. LeBron is leaving Cleveland to  join the Los Angeles Lakers.

We know these takes remain a little blurry. The Lakers and other teams are still incomplete. This squad will look different in a few years.

This move is a little risky, but it’s more brilliant.

It’s risky because he’s playing in the Western Conference. This group of teams offers a ton of heavy weights. Remember the Battle Royal in the WWF? It’s brilliant because he is showing he is willing to give up his grip of Eastern domination, to come hang with the “big boys.”

It’s risky because he has to play the Warriors to get to the Finals. It’s brilliant because he may as well get in there and go nose to nose with them. He is already connected with that group for life. Friends close, enemies closer.

It’s risky because he is playing on a must win stage. He is competing in the shadow of the best individual players in NBA history. It’s brilliant because he will ultimately win. He will become one of those Lakers shadows.

What if he failed in L.A.? LeBron is more self secure than he used to be. He’s showing lack of fear to do this.

The Lakers fan base is a nation. Tonight, “King James”  took their love hostage. The prize athlete in the sport is with its most glamorous franchise. He is normally the top story.  In L.A, he is THE STORY. LBJ just made sure the defending champion Warriors  are the second most popular team in the state of California.

Some imply this will be James farewell act. Not true. He will only be saying goodbye to his prime. He will do it chasing Michael Jordan under the brightest of lights. He can never be as perfect as Mike, but he will match him by taking different roads to GOAT island. He will do it with the volume of greatness.

Winning in multiple cities is one angle ( I think he gets at least one ring with the Lakers).  He will be relevant as an active player for more than two decades. It will be during the noisy internet, social media era. He is now in Los Angeles? He’s piling on. Basketball society will be overwhelmed by his long-term relevance, as he smashes records nightly. LeBron loves to control the narrative.

Even if James teams up with a player as top shelf as Kawai Leonard, this time LBJ doesn’t look as bad. The Warriors have gotten to the point they are seen as skilled bullies. More “super teams” are about to be seen as normal.

He is in the best place for his family and his entrepreneurial goals. You know this is going well when Dan Gilbert and Cavaliers fans are celebrating LBJ today.

Jeanie Buss and Magic Johnson are the right people in the key seats.  I like the fit basketball wise. James meshes with everyone, and this team is full of young, ready to improve talent. Tonight they also added JaVale McGee and Lance Stephenson. Both add physical impact. More shooters and help are still on the way, this year and next. LeBron and Luke Walton will get along  just fine. Walton will let James run things, but has enough experience and respect to maintain his status.

L.A. has struggled for a handful of years. LeBron is about to save the Lakers. He sure picked a good story to control.