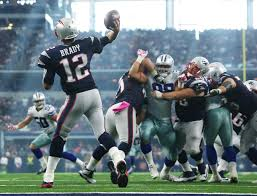 When the name Tom Brady comes up, there is one memory I’ll always think of first. It’s not a Super Bowl, Ugg slippers, or a controversy. It’s a random week five game against the Dallas Cowboys in 2011. It’s actually a singular moment that stands out in my mind.

This game was a big deal to me. The chance to beat the Pats and Tom Brady (and my buddy David Schultz) is an opportunity that comes around every four years. It was New England’s turn to play at home. The Cowboys came to compete hard on this Sunday in October.

It was one of those games where Dallas was out playing them, but only maintaining small leads. The Cowboys offense was sinking in the red zone as the Patriots held them to field goals multiple times.

The real action began here. There was five minutes left, and New England had the ball down by three points. Even in 2011, my fear of Brady was intense. You know this is where he sticks it to you. I was shocked and elated when the Cowboys held them to a three and out. They have picked off Tom twice today, sacked him three times, and now this? Wow! They have to take advantage.

Dallas has the ball with 3:36 to go. A couple first downs and this baby is in the refrigerator. First down. DeMarco Murray gets tackled in the backfield for minus two. Second down and twelve. Minimum Dallas needs to throw a screen pass here. Instead, Murray on the ground for minus one. Tony Romo melted down the week before vs Detroit, and the coaching staff got gun-shy. Sitting on a lead in the NFL is telling the football Gods you would like to lose. Playing that way against Bill Belichick, you are begging to lose.

Third down. False start Dallas. Run for a few yards. Punt. Brady now has the ball on his team’s own 20 yard line. There is 2:31 left to play. This defense that had played rugged all day, was about to be burnt toast. There was no deep mystery here.

Then it happened. It was like an episode of Batman from the 1960’s. Pow! Sock! Wham! Tom was 8-9 passing on the drive for 79 yards. It’s like he was taking a walk in the park. Finally, the dagger came in the form of an eight yard touchdown pass with a measly 27 seconds on the clock.

Cowboys fans had their hearts broken on that play. I started dealing with it twenty minutes earlier. Tom Brady is so great, you can assume he will do difficult things easily.