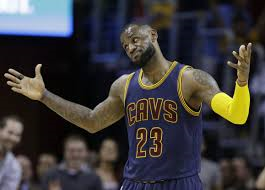 How many more titles will LeBron James win? How many more does he need to win? Some say his June success is over. We could be technical and say he doesn’t “need” to win anymore. He is after all a record-breaking, three-time champion. If he stayed put on that total, James would have top two to five player of all time status locked up. LBJ has bigger goals than that. For the path this King is on, winning big is still a requirement.

At the end of his fifth pro season in 2008, James had yet to play on a Finals winning team. He was over passive at times, and many media members crushed him daily. At that point, I thought LeBron was an NBA legend. I predicted he would end his career with four rings. That number seemed to be a fair goal for this phenom.

This Fall, LeBron will play his 16th season in the league. He’s at the end of his prime. His drop from being the best player, will be a slow leak. James changing teams provides advantages to his legacy. It’s lame in some ways as he recharges with new groups of talent. It’s brilliant in other ways because he proves his adaptability to different situations. Every time he leaves a city, it creates celebration dividers for his story. The mobility enhances his brand. King James is wearing the basketball world down with his relevance. Being a champ in a third city will be his fans claim to justify why he is the greatest. It may be a more muddy road than MJ took, but many will see James fourth chip as “G.O.A.T. like status.”

This means LeBron needs one more ring. I think he will get two.