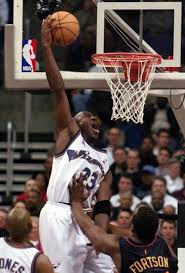 Michael Jordan played his last two season’s as a member of the Washington Wizards. This window of time is often referred to as “forgettable.” It’s said Michael’s Washington days were a sad mistake, and a negative chapter in his basketball story.

While there is something to that angle, I think Jordan’s years in D.C. are being misdiagnosed.

I loved Magic and Kobe from the jump. It was MJ’s level of greatness that had me invested in his journey. I was fascinated by how he dominated his craft. When he came back from baseball in 1995, it was a scary risk to his legacy. It worked out quite well for Michael, who took over the NBA once again.

The way he finished his career in Chicago, could not be matched in the category of perfect endings. Making a comeback after sitting three years (at age 38) with the lowly Wizards? Talk about a scary risk! This was going to at least stain him in some way.

MJ was part of Washington’s front office. He was going to put his influence back on the floor to enhance this franchise. He also had competitive fuel left to burn off. The young superstars in the league wanted a piece of Mike, and he was fearless enough to let them have some. I made it my priority to watch him compete.

It was a couple of days after Christmas in 2001. The Wizards lost by 27 at Indiana. Michael scored just six points. This ended his double-digit points streak of 866 contests. Over the next two games (victories) Jordan averaged 48 points, 8.5 rebounds, 5.5 dimes, and three steals. His 51 point night was ignited by information. The guy guarding MJ told him “my back hurts.”

The good was a rainbow of nostalgia. He still had the ability to close teams out in the clutch. One night in Phoenix, Jordan hit the last second jumper to ice the game. Hundreds of fans wearing Suns jerseys screamed out in joy. Had they forgotten Michael had just beat their team? They were drawn to a special level. They were happier seeing excellence over what was best for their own cheering agenda. We don’t want to let go of the magic feeling heroes bring our way.

The bad was hard to look at. As an older athlete Michael was now dealing with several physical ailments. Sometimes his brilliant jump shot game, would seem like all that he had. His legs could get heavy and his shots would fall flat. One night, he scored an unthinkable two points. My buddy Conner brings up one of his very first memories of Wizards Mike. “An air ball.”

HOW GOOD WAS THE WIZARDS VERSION OF MJ?

Jordan’s two Wizards squads did not make the playoffs. They were 37-45 in both seasons. They had won 19 games the year before Mike got there, and 25 the season after he left.

He was able to provide a defensive punch to this group.

I would guess Mike was somewhere between the 17th to 27th best player in the world. An “All Star.”

He was a technician, who was no longer efficient every night.

Though sometimes dazzling, and just as fierce…

The Wizard years proved MJ was now a human being on the court.

His level wasn’t sad, it was just sad compared to the beautiful shadow that followed him around.