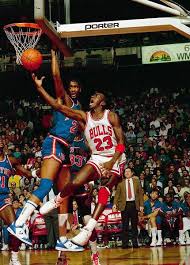 He became the first player to record 200 steals and 100 blocks.

On April 12th against Indiana, he scored 53 points on 70 percent shooting.

The following night in Milwaukee he dropped 50 to go with his 9 rebounds.

His next game at Atlanta?

His 61 points and 10 rebounds were not enough, as the Bulls lost by 3.