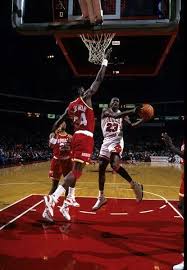 I’ve had a book on my shelf for years. It’s called “Living The Dream.” It’s an Hakeem Olajuwon biography with Peter Knobler. Last night, I finally read it.

At the time this was published (1995) Michael Jordan was playing baseball, and Hakeem was the best basketball player on earth.

Chapter 12 was an in depth break down of Olajuwon’s opinion of MJ. It was his scouting report.

“Michael Jordan and I came into the league at the same time. It didn’t take me long to realize this was the greatest player I had ever seen. When I analyze an opponent, or team for that matter, I try to see their weaknesses. Jordan was strong in every area. If you gave him anything, he would beat you. I gave him the ultimate respect, because he was a complete player.

Playing against Michael Jordan was an all day challenge. He has very big hands, like a big man. When you shake his hand, you don’t think he’s a guard. He could palm the ball like Dr. J, which made his ball control amazing. His fakes are so sharp and real you have to go for them. He can follow through on anything he threatens.

When I look at basketball players, sometimes I think of animals. Michael Jordan is like a big cat jumping on a rock: as soon as he lands he goes straight up. People think he’s going to a spot on the floor but really the court is his stepping stone. He gets the ball, hops to a space, and leaps. I’ve routinely seen big men not even try to stop him. They get out of his way. He explodes on them and they don’t want to get dunked on.

Most superstars, if they match up, neutralize each other. When you put together your game plan you figure that unless someone has an outstanding night, this is a stand off, the game will be won by the other teammates. He’s different. Michael Jordan dominates superstars.

If he were an animal in the jungle Michael Jordan could lie out on the biggest rock and no one would disturb him. No one would attack him. He wouldn’t have to watch his back. All the other animals would wait fearfully: they’d be scared even while he slept. He would stalk down his prey and take anything he wanted. Afterward, he would prowl around, full, quiet, peaceful, his tail swinging. In the NBA, Michael Jordan walks around the jungle freely.”

At the time Hakeem said this, MJ had won three of his six world championships.