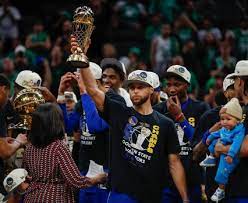 The Golden State Warriors are world champions for the fourth time in the past eight seasons.

The comeback for this franchise, with the context of their roster, at this pace is stunning.

ESPN’s Stan Verrett said to Jalen Rose, “he had nothing to prove, but proved it anyway.”

Yes and no Stan.

When you become as awesome as Steph, every detail matters.

We nitpick and use microscopes with our own agendas.

Curry had something to prove, and boy he did it.

I predicted his Warriors would lose in six to Boston.

It was jump shooting and ball handling wizardry.

It was incredible endurance, newer muscle, and defensive resistance.

He was definitively the best performer on the floor in this series.

There are no more holes that need to be filled on his resume.

Where does this leave Steph?

He was already the best 6’3″ and under player to live.

We make this crap up.

Ironically, about a blade of grass ahead of Kevin Durant.