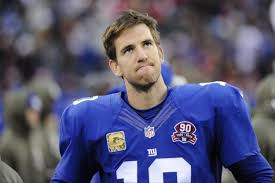 The New York Giants (2-9) have benched Eli Manning for the rest of the year to look at younger players. This has caused quite a stir, and a reason for everyone to judge Manning’s career.  As a Dallas Cowboys fan, my job is to “hate” Eli. I truly have thought of his interceptions to put myself to sleep a few times. I can picture each pick, like cute little sheep.

From a family of football royalty, it comes across like Eli has always been fighting through shadows. He doesn’t have the skills his father had. The only time he has ever been better at football than his brother Peyton, is right now.

Who has ever thought of him as top three QB at any point? Top five? Bueller? This guy is very hard to rank among the best that ever played.

Manning has three seasons of disgusting interception totals (20, 25, and 27).  He would turn the ball over and have this mopey expression that would annoy Giants fans to no end. I can see him unsnapping his chin strap to a chorus of New York boo birds as he walked to the sideline. Tiki Barber said he would follow a young Manning off the field yelling “posture matters”!

Eli is very good. He is tough, durable, smart, and above all clutch. Some will claim “Eli threw a couple lucky passes to win his two Super Bowls.” That’s garbage!

In the 2007 post season, he beat a Cowboys squad with 13 Pro Bowlers on the road. Number ten then out clutched Brett Favre in extreme temperature in Green Bay.

Manning then played a huge role in the biggest NFL upset of my lifetime. That Patriots team came in 18-0, and WOULD HAVE been considered the best single season team of all time.

Eli won a second ring and Super Bowl MVP a few years later. Let’s not under do that his teams beat Bill Belichick and Tom Brady TWICE when it mattered most.

This guy is a class act. He  will end up in the Pro Football Hall of Fame someday. First ballot? Probably not…Eli Manning is a weird level of greatness.