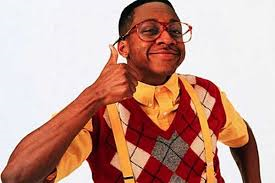 I would say my Dad was a casual basketball fan. He helped me love the game, but the NBA wasn’t his priority. He was a Utah Jazz supporter, and was quite invested from about 1988-93.  My Mom (Jazz fan) could sit back and marvel at Michael Jordan. My Dad respected Magic, Bird, and Mj. He was not going to celebrate them. They were not on the Jazz.

It was a Friday night in the early 1990’s. My Dad was sitting in a room while an episode of “Family Matters” was playing. I was about eight feet away and could only hear the sound. In this episode Steve Urkel is over at the Winslow house while Carl is watching a Chicago Bulls game.

I’m paraphrasing. You could hear the game announcer say…”The score is tied….Jordan has the ball….4 seconds….3 seconds….2….Jordan shoots it from the elbow…..and”….

Right then Urkel pulls his typical clumsy move and unplugs the TV. Carl is freaking out. “STEEEEEVE!!!!”

I’ll never forget my Dad shaking his head at Carl’s panic, then saying “He made it. Relax.”

Jordan didn’t make all of his clutch shots. He missed many of them. This story was an objective look at  how people saw Michael when the game was on the line. They expected him to gut you.