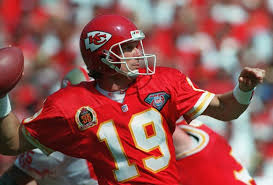 It’s often mentioned on the side, but we don’t talk enough about Joe Montana playing for the Kansas City Chiefs. His time there was a vital chapter in his story book run. It’s more remembered as him slowing down and not winning big. That’s the lazy memory. These two seasons added a layer to his journey worth bringing up.  When you are talking about his legacy, Joe Montana’s Chiefs days deserve more love.

Go back in time with me and think of the climate. Montana had just been involved in the loudest QB controversy of all time with Steve Young. Joe had missed two full seasons and Young was rolling. Montana was now healthy for the last regular season game in 1992. San Francisco played him for a half, and Joe looked razor-sharp. You could feel the 49er’s fans loyalty pouring out of the television. Those same people felt empty. It was time for number 16 to go.

It’s often a risk for someone of Montana’s stature to change teams. He was the best QB I had ever seen play. There was a lot to live up to. The Chiefs were a defensive football team. Joe was blessed with Marcus Allen. Instead of Rice, Clark, or John Taylor to throw to…..Montana now needed to bring along wide receivers Willie Davis and J.J. Birden.

Joe was 8-3 as a starter. He fumbled only once. He was selected to the Pro Bowl.

The Chiefs were AFC West champions for the first time in 20 years.

On fourth down and seven. with the season on the line….Joe threw a touchdown pass to tie a Wild Card game against the Steelers. Kansas City won in overtime.

In the Divisional round at Houston, Montana led another come from behind victory.

Kansas City and their quarterback made it to the AFC championship where they were out classed by the Buffalo Bills.

In the span of eight days, the Kansas City version of Joe Montana won as many playoff games as Joe Namath, Tony Romo, Ken Anderson, and Michael Vick each did in their entire careers.

September 11th 1994. San Francisco at Kansas City. I know it wasn’t a one on one game of basketball in the Park. Steve Young vs. Joe Montana was a huge deal. The game was “bigger” for Young. Still, Montana playing better and winning 24-17 was powerful career gravy. It kept the perception alive that Steve was the one still chasing Joe. Young and his guys went on to win what matters most, the Super Bowl. The two only played once, and Joe got him.

Five weeks later in Denver, Montana threw a scoring strike with eight seconds remaining to beat, and out duel John Elway in the clutch.

In only 25 regular season games in Kansas City, Joe was named the “AFC offensive player of the week” five times.

The reason Montana’s time as a Chief was important, is because things were harder for him. Getting off the ground seemed to take quite an effort. He was beat up. The numbers were now nice, not elite. This was a very good Chiefs team, not the dynasty he had helped build. Through the age and pain, I could still see the surgeon….. the tough guy with the sweet feet…and mostly I could still see “Joe cool.”