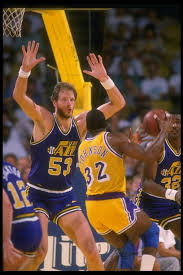 Ranking the best defensive players is more difficult and subjective than the offensive side of things. A coach or scout would give the wisest answers to a test like this. I’m ranking those who played from 1988 to 2018.

I left the following guys off the list because I did not see them at their best:

This is my best guess. The 30 best defensive players I’ve seen in the NBA.

#30- JOAKIM NOAH- There is often that sweaty guy, trying harder than everyone else. This one is 6’11. with tons of hair. Noah’s passion helped make him a force.

#29- BUCK WILLIAMS- I remember the Trailblazers version of Buck. Anyone that could battle strong against Karl Malone is hard to forget.

#28- ANTHONY DAVIS- Davis gets a spot as a young guy, because he’s a modern monster.

#27 MOOKIE BLAYLOCK- When Pearl Jam originally names their band “Mookie Blaylock”, you are legit. On three teams, over an 11 season stretch, Mookie stole the ball at an outrageous clip.

#26- DEANDRE JORDAN- I was going to put Tyson Chandler or Karl Malone here. DeAndre is a stud! His lowest rebounding average in the last seven years is 13.5 a night.

#24- BRUCE BOWEN- Bruce would get into shooters. He was a part of three title teams. I might be not giving Bruce enough love at 24.

#23- MARCUS CAMBY- It was Sprewell and Houston that were the headliners on the 1999 Knicks. The x factor was the unique Camby. He led the NBA in blocks four times.

#22- JASON KIDD- I remember how physical Jason could get, without fouling.

#20- JOE DUMARS- Everything about Dumars was worth trusting. He had a stable base and knew how to use his help.

#19- DRAYMOND GREEN- Steve Kerr has played with and coached legends. He calls Green’s defensive anticipation, the best he has ever seen.

#18- RUDY GOBERT- A package that includes length and coordination. Rudy wants to compete, and is the best shot changer in the game today.

#17- KOBE BRYANT- Bryant was as fierce as it gets in the sporting world. Late in his second season Jared Adams correctly told me “Kobe will become a better defender once he learns to play less hard.”

#16- MARK EATON-  Eaton was taller and wider than most humans. He was the first guy I saw affecting the game just off presence. Mark simply standing there mattered. During the time he played, he was under appreciated.

#15- ALONZO MOURNING- Zo reminded me of a professional boxer on defense. His rejections were like punches. He was also at his best with a scowl on his face.

#14- METTA WORLD PEACE- The artist formally known as Ron Artest was a classic lock down guy. He was like a consuming bully on D.

#13- GARY PAYTON- “The glove” was just all over everyone…with his body and his mouth. Defensive Player of the Year at 6’4″.

#12- LEBRON JAMES- LeBron’s as versatile as they come on defense. He could cover prime Derek Rose one game, and Pau Gasol for a half the night after. He’s a vocal quarterback.

#11- DWIGHT HOWARD- It seems forgotten Howard is one of the finer athletes to be involved in basketball. He’s a three-time Defensive Player of the Year, and has led the pros in rebounds five times.

#10- KAWHI LEONARD- To me, he would be the perfect cover on prime Jordan or Bryant.

#9- DAVID ROBINSON- David was chiseled, had quickness and sharp timing. He was a highlight stopper.

#8- SCOTTIE PIPPEN– His coming out party was the challenge he accepted against Magic Johnson in the 1991 NBA Finals. Scottie could smother dudes.

#7- TIM DUNCAN– The brains, composure, and fundamentals carried over to the defensive side of the floor. Tim was All-NBA Defense 15 times.

#6- MICHAEL JORDAN– Michael kept a low stance, while he stalked his opponent. After having consecutive years averaging 37 and 35 points, MJ was asked how he wanted those feats to be remembered? “That I played great defense. I never want my scoring and dunking to overshadow that.”

#5- KEVIN GARNETT- He was such a beast he didn’t let the ball go in the basket even after the whistle had blown. At nearly seven feet, it was common to see KG check point guards on multiple possessions.

#4- DENNIS RODMAN- His energy could control the crowd. He knew where missed shots would end up. Rodman’s knack for the glass was unmatched.

#3- DIKEMBE MUTOMBO- His finger wag has become the basketball part of his identity. The gesture says everything about Mount Mutombo’s dominance.

#2- BEN WALLACE- Wallace was a hard man. He was the perfect blend of muscles and moving feet. Ben was number one in defensive rating from 2001 to 2004.

#1- HAKEEM OLAJUWON– There is no guessing here. Hakeem’s footwork was superb on both ends. He could evaporate space in an instant. Want a stop? I’d call “Dream”. As a defender, Hakeem has been my lifetimes Bill Russell.