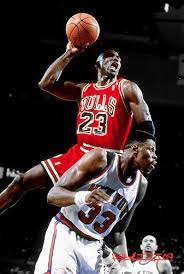 Not too long ago LeBron James called himself the “King of New York.” Excuse me your majesty. You are certainly King, but you are only a prince in the “Big Apple.” No disrespect intended to Joe Namath, Walt Frazier, Willis Reed, and other New York City champions. Derek Jeter fans can be offended if they want to be. The real King of New York is “Air Jordan.”

WHO WERE THE KNICKS TO MJ?

They were not the “Bad Boys.” They were however, pretty bad ass. The Knicks were like the younger, slightly stronger brother. They had big mouths and the game to go with it. New York was like Michael’s secondary rival. The competition was physical, heated, and personal.

HOW GOOD WAS NEW YORK?

For the belly of Mike’s career, the Knickerbockers had serious clubs. At their very best, Pat Riley was running the show. MJ admired the competitor in Riley, and wanted to destroy him. He took specific pride in performing at Madison Square Garden. Soak in the quality names that went head to head with Michael’s Bulls and Wizards.

I have to give love to some of the noteworthy helpers. Charles Smith, Gerald Wilkins, Greg Anthony, Bill Cartwright, Pat Cummings, Johnny Newman, Darrell Walker, Rory Sparrow, Kurt Thomas, Trent Tucker, and others.

Michael played the Knicks 60 times in the regular season. He was 47-13.

In the 15 different years he was on the floor, Jordan had a losing record against New York…once.

During a stretch, the Bulls won 11 in a row.

MJ scored 40 or more points against them 19 times.

If you scored over 50, four times in a career, you would be awesome. Michael did that against the Knicks.

WHAT HAPPENED IN THE REAL PRESSURE?

He was the player most responsible for suffocating this franchises title hopes.

Gary Vaynerchuck is one of the worlds most intense sports fans. He is working towards buying the New York Jets and adores his Knicks. He has made it clear that he hates Jordan. He loathes him to the point that he would never work with, or do any kind of business with him.

I get it. It seems kind of perfect Michael was born in Brooklyn. Jordan owned the Knicks!