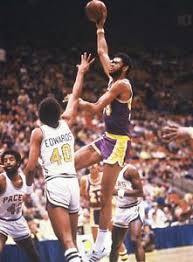 It’s no wonder that Kareem Abdul-Jabbar disapproves of “G.O.A.T. conversations.” His name is not involved in them enough. The master of the sky hook has been the NBA’s all time leading scorer since 1984.

LeBron James has climbed his way into fourth place in total points. After reaching this milestone, the natural question was asked….

I’m surprised how many say he will not do it.

There are too many factors in his favor, starting with the math.

That leaves James 5,948 points short of the captain. He will add to that over the next few weeks.

His key accomplishments to date are built around eight straight Finals appearances, three Finals MVP’s, and massive stat totals. To move Kareem off that spot, would be a beautiful addition for any basketball resume.

LeBron wants this. It matters to him. He wants to play forever.

It’s a big deal to his fans (who over value his stats to make up for June disappointments).

LBJ missing the playoffs, will give him two extra months rest. He needs it. You will see the payoff this October.

He loves shooting threes, in an era that begs for them.

James is older now and has to pick his spots. At the same time, his demise is being greatly exaggerated.

In the last two weeks, at his seeming low point…He’s made about 25 super athletic plays.

The best version of him may be gone, but he will remain a superstar for years to come.

Father time is being lazy at getting his hands on LeBron James.

I’ve made a thousand bad predictions. I’m sure I’ve nailed a few hundred.

During LeBron’s fourth season, I said on the air multiple times:

“Scoring is not James priority or his best skill. He’s so good at it, and has so much power… I could see him being the all time points leader when he retires. I could see him winning a scoring title, on accident.”

There is no way James is the best scorer I’ve watched play.

He’s a passer. Putting the ball in the hoop is like his side hustle. He’s the most casual, easy scorer I’ve ever seen.

I knew he could out score history, at a time he was being called out for not shooting the ball enough.