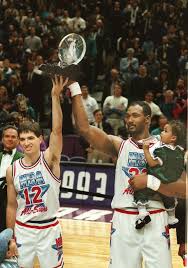 Stephen Jackson was a very good NBA player. He joined “The Herd” on television last week. Colin and Stephen were talking about the top scorers to ever play in the pros.

Herd: “Were you a Karl Malone fan?”

Jackson: (With a negative tone) “Utah wasn’t a big team. We never got Utah games on our feed in Texas. Nobody was buying Utah jerseys. You didn’t see Karl Malone and John Stockton in rap videos.”

Jackson: “Nobody knew nothing about Utah. No I was not a Karl Malone fan.”

Herd: “His game didn’t do anything for ya?”

Jackson: “I liked Barkley better. I think he was better than Karl Malone.”

Jackson didn’t say anything wrong. He just gave his opinion through his experience. What annoys me, is I’ve heard it too many times. Those Utah teams are respected a ton inside the league. For the common fan throughout America, they are usually an after thought.

I’m not a Jazz fan. I’m a Jazz friend. I follow the franchise because they play in the city I grew up in.

Karl did not have the flashiest game. His elbows made sure he was not the most popular. It’s also understood that the NBA league pass and the internet were not a factor for most of John and Karl’s time.

But, a little respect please.

It’s a sports crime to not understand the importance and greatness of Stockton and Malone.

It’s obvious to big basketball fans these two legends careers should speak for themselves. Apparently, they don’t speak loud enough.

Shaquille O’Neal has been open about the fact his Lakers wanted to avoid the Jazz in the playoffs.

“John and Karl would pick and roll us to death.”

Joe Dumars said, “Those two had a spooky thing going. They could mind read on a different level.”

Stockton and Malone led their Jazz to the post season in 18 straight seasons. The visiting team was probably going to lose in Salt Lake City.

They led Utah to back to back NBA Finals. Those teams averaged 63 wins, and were the toughest challenge the 1990’s Chicago Bulls would face in the championship round.

John and Karl were members of the original “Dream Team.” They were also part of the historically underrated “Dream Team 3”.

THE BEST ABILITY IS AVAILABILITY

Stockton and Malone had the opportunity to play in 2,970 regular season games. They played in 2,938. That’s about a 99 percent attendance rate.

These men played in a more physical era, and they were the ones delivering the blows.

They also played in a combined 375 playoff contests. I’m sure a lot of those games made it to television in Texas.

We know he has the most assists and steals of all time, and it’s not close.

He led the league in assists nine straight years.

A long time NBA coach told me, “John is one of only three guys that size I’ve ever seen, willing to destroy their body on a pick.”

Most free throws made all time. It might not fascinate you, but to stop the “Mailman” you had to clobber him.

As a muscular figure sprinting the floor, Karl was serious business.

I thought Charles talent produced a little more eye candy. To rebound like that at 6’6″ was crazy.

Karl is more accomplished. He was also a much better defensive player than Barkley.

John and Karl were loyal. They were ready to work like the early rising farmer. They were street ball tough.

They became the faces of Jerry Sloan’s Hall of Fame leadership.

Not everyone needs to like John and Karl. It would be better if more fans knew about them.

I would tell Stephen Jackson this…John and Karl should have been in rap videos.