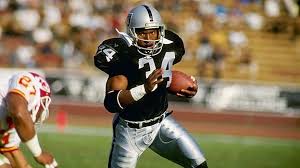 There is no such thing as “the best football player ever.”

No disrespect to you, Mr. Jim Brown. Sir.

Too many have played, and the games needs are so diverse.

This is not an “all time list.” I’m not ranking those I didn’t see. I’m only including those I saw enough of, or at their best. Example? I saw Walter Payton, but not enough. I saw Randy White, but not at his best.

I wanted to attempt to list the 50 best player’s I’ve seen.

Please appreciate how small the number 50 is in this case. When Kurt Warner, Darrell Green, and Mike Singletary didn’t make the cut?  It was difficult not to name 200 guys.

#50- GARY ZIMMERMAN- Road grader. All-Pro with the Vikings and the Broncos.

#49- TROY AIKMAN- I first think about those three Lombardi trophies. Then, the accuracy of that twelve yard out.

#48- AARON DONALD- Next level. Many believe Donald is the best player in the sport today.

#47- ADRIAN PETERSON- He was already a first ballot Hall of Famer to be. Peterson’s performance with the Redskins last year, left no doubts about that.

#46- DEVIN HESTER- I’d say the same thing every time the Cowboys squared off against the Bears. “WE” CAN NOT KICK TO DEVIN HESTER.”

#45- BO JACKSON- The more responsible pick here would be Thurman Thomas, or Marcus Allen. I can’t ignore what it felt like when Bo was on the field.

#43- TROY POLAMALU- Troy blended control with crazy. He competed like his flowing hair was on fire.

#41- ROB GRONKOWSKI- In a vacuum, Gronk could be argued as the greatest tight end to live.

#39- JULIUS PEPPERS- An exotic athlete, Peppers made blocking field goals his side hustle.

#38- TERRELL DAVIS- He was the Gayle Sayers of the post season.

#36- TERRELL OWENS- That initial burst off the line of scrimmage was special.

#34- CHARLES WOODSON- The do it all ball player.

#32- CHAMP BAILEY- Champ would be the corner you’d pick out of a wish list catalog.

#31- J.J. WATT- A three time Defensive Player of the Year, who will play tight end and help save your city.

#30- BRETT FAVRE- The face of durability and gun slinging.

#28- DARRELLE REVIS- His island was a real place. Revis tackled too.

#26- BRUCE MATTHEWS- He could get it done on all the offensive line spots. He mastered learning how to fall down.

#25- LADAINIAN TOMLINSON- To me, he was the first face of a fantasy football legend. In real life, Tomlinson was the face of offensive domination.

#24- BRUCE SMITH- He remains the first and only man to have 200 sacks. Bruce led his Bills to four straight AFC titles.

#23- EMMITT SMITH- Under the microscope of individual and team success, Smith has the best resume of any back in NFL history.

#22- ED REED- Reed was like a dynamic offensive player, who happen to dominate on defense.

#21- MARSHALL FAULK- Marshall was a football brain. He’s a model example of the “all around running back.”

#20- RANDY MOSS- He had graceful, deer like strides. Moss had the ultimate ball skills.

#19- ROD WOODSON- The most underrated star of my lifetime. I might have just done it to Rod again.

#17- AARON RODGERS- The most talented, to play the most important position.

#15- RAY LEWIS- His leadership was tangible. The entire league gravitated to Ray.

#11- JOHN ELWAY- At his apex of being criticized, John was the best clutch player in the AFC.

#10- BARRY SANDERS- Barry’s dazzling style and production made him a gem for eternity.

#9- RONNIE LOTT- When the ball had been thrown, I could always feel Ronnie lurking….so could the dudes that were getting ready to come across the middle.

#8- LARRY ALLEN- A man who could bench press 700 plus pounds, and played like it.

#7- REGGIE WHITE- The best defensive lineman of my lifetime. No hesitation.

#6- PEYTON MANNING- Peyton made the pre snap experience a symphony. He was a “changed the game” type guy.

#5- DEION SANDERS- Deion was a born performer, who came with Ali like swagger. He was built for the prime time stage.

#3- LAWRENCE TAYLOR- When I was a kid, L.T. was the force that was shaking up NFL blocking schemes.

#2- JERRY RICE- If you asked me who had the least flaws? Jerry Rice.

#1- TOM BRADY- He’s on the level with all the elite. Add that he’s slapped father time in the face, and wins more than everyone.