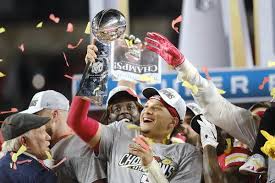 There was nothing subtle about Patrick Mahomes first two seasons in the NFL.

A good example would be passing for 50 touchdowns as a first year starter.

He looked like an Aaron Rodgers level talent. If possible, with an even higher ceiling.

He was named the leagues Most Valuable Player. Patrick and his Chiefs pushed the Patriots to the edge in an AFC championship game loss.

For those of you who say he wasn’t the MVP of that game, I say this.

The position he plays is an automatic advantage for awards like this one.

At the same time, let’s be honest.

If the Chiefs lose, Andy Reid takes another ding.

Mahomes would have taken the blame.

Like every champion, Kansas City had lots of heroes.

Lets not forget, the 49ers are no joke.

Number 15 is a magician. He often makes me think of John Elway.

The way he played the last eight minutes of Super Bowl 54, erases his earlier struggles. That’s just how it works!

There has been some massive statements about his place in history this week.

Some have gone as hyperbolic as calling him, “the greatest QB and football player of all time.”

More have said, “He’s already a Hall of Famer.”

IF HE NEVER PLAYED ANOTHER SNAP, IS HE A HALL OF FAMER?

The answer is no.

He would need a bigger body of work. Maybe a little more winning, or even just the scraps of success. He would need at least a few more seasons.

He’s accomplished maybe about 60 percent of what Terrell Davis did.

Davis had to wait eight years to get the call from Canton.

That ring in Kansas City will live forever.

Mahomes has only been legendary for a minute.

How do we quantify his impact so far?

He does have a ring playing quarterback.

They are not Hall of Famers.

However, they are mini legends.