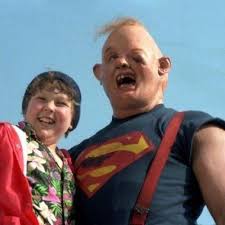 
My fifth grade teacher was Nyla Thompson. She inspired me to write in our elementary school newspaper. As an end of the year reward, we were going to go to her house and have a pizza party. Mrs. Thompson rented “The Goonies” which had recently been released on video cassette.

We enjoyed ourselves as we watched the show during our dinner. The movie ended. The room went from completely silent, to an explosion of cheers. There was probably eight other students there with me. They clearly just had an amazing 114 minutes.

I remember thinking, “It was good. It was an 8. It wasn’t freaking Star Wars.”

I’d probably seen The Goonies three or four times over the years. In my day, it’s considered a classic.

I started being blown away by how many people LOVE The Goonies.

I mean, THEY REALLY LOVE IT. It’s like a right of passage in the cinematic experience. They are protective and defensive of the film. Many of those fans saw it for the first time, through the eyes of a child.

Let’s set ourselves up at the beginning of 2020.

My general opinion was that “The Goonies is the most overrated, Hall of Fame type film of my lifetime.”

Now to summer of 2020. They were putting out some old school stuff in the theatres. Though I certainly saw some better choices, my wife wanted to see “The Goonies.” My brother and I had never seen it on the big screen.

I told Emi this was a chance for me to give a fresh, fair, retake.

So I watched it again.

The truffle shuffle almost made me crack a smile.

Chunk and Sloth were an awesome combination.

My favorite scene is when the criminals were trying to get Chunk to confess.

With a genuine heart, he tells the truth about everything he had ever done wrong in his short life. He’s balling his eyes out. Jake Fratelli, with his hands gently on Chunk’s shoulder goes, “I’m beginning to like this kid Ma.”

You have to appreciate the under ground world they find. The traps, the tunnels and the mystery of what could come next. It’s a bit “Temple of Doom.”

The room where they find the ship is pretty spectacular.

Data? His gadgets and parents? Cute.

The first half hour was slow, and frankly not good.

Chunk and Sloth were on screen very little.

The Fratelli family got a lot of reps. Should they have?

As they chased the kids through the maze, I’m not sure what kind of music was playing. In my head, I heard zany clown trumpets. I didn’t feel the threat. The burglars from Home Alone put more fear in me.

Sean Astin as our fearless leader? The best thing little Rudy did was take those puffs off his inhaler. I didn’t buy his passion for their goal.

There were a number of movies during this time that were aimed at children, but had adult elements as well. This show can not say the same.

I went that afternoon hoping I had been a little harsh in my opinions.

You’ll hate my take on The Goonies.

It’s a great adventure for kids.

I think you’re all being sentimental.