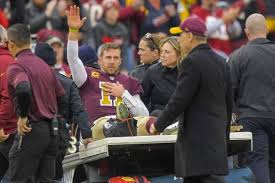 In November of 2018, Alex Smith suffered one of the most horrific injuries in the history of the NFL.

This excerpt from a May 2020 article on Yahoo/Sports says it all.

According to Smith’s wife Elizabeth, Washington’s team physician Robin West told her: “Elizabeth. we’re doing the best we can. Right now our first priority is we are going to save his life. And then we’re going to do our best to save his leg. And anything beyond that is a miracle.”

Smith had 17 surgeries in nine months.

He wanted to give his children the message of not quitting.

If I ever had a tie to Alex Smith, it’s that he used to play college football down the street from my house. He was a stud by the way.

Alex gave steady play a cool factor. He was super brainy and athletic.

His University of Utah team went undefeated in 2004.

In the 2005 NFL draft, Smith was chosen first overall by the San Francisco 49ers. That was 23 spots higher than Aaron Rodgers.

Any first overall selection, lives under the burden of large expectations.

A lot of his time in San Francisco was average. This included his performance, and the results on the scoreboard. I recall the offensive coordinators coming and going at a high rate.

Smith evolved nicely in Kansas City with the Chiefs.

He played in three Pro Bowls and made a name for himself.

My favorite Smith stat? He has 14 touchdowns and 2 interceptions in his playoff career.

Though successful, and a tough quarterback to face, Alex never sniffed being a superstar.

When Dak Prescott was a rookie, his conservative style reminded me of someone. I said about Dak, “he’s the king of careful. He reminds me of an Alex Smith with more upside.”

At the peak of his abilities I remember Tony Abbott calling Smith, “the perfect backup QB.”

There’s a former pro basketball player named Joe Smith. He was the first overall pick in the 1995 NBA draft.

Joe was as willing to sacrifice his body and take a charge more than most. He became a terrific role player.

He was never close to an All-Star, but his gritty nature assured he was never a bust.

More than just the same last name, I used to think of Alex and Joe in a similar light.

Has Alex Smith lived up to a number one pick?

He’s scrapped with the best, won games, and has now created a memorable niche.

The mere fact this man is playing football right now is hard to comprehend.

When you climb the ladder Smith did to come back?

You’re going down as something.

You’re going down as a miracle.