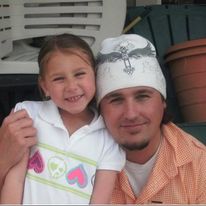 Russ Riggs would have been 46 years old today.

It’s a natural time to tell a story to his kids Madalyn (pictured above), Jayden, and Samantha.

Rusty and I shared the same level of attachment to sports. It often ran our lives. That’s why I’ve been fascinated that his love of music, is the tool I use most to grieve his loss.

To say Russ adored R & B would be selling this fact short. His favorite artists and songs, are the easiest ways to see his soul.

OUR INTRODUCTION TO BRIAN MCKNIGHT

By the fall of 1993, I was under the influence of the R & B that Rusty had brought to my life.

The first time I heard Mcknight, I was on the freeway headed to Utah Valley State College. The title was “One Last Cry.” I was blown away. I got to my seat in history class and sat down next to Russ. I remember asking him if he had ever heard of this guy. He said, “Ya, that songs pretty good. The album is kind of stench. Give “After The Love” a listen.”

I told him I was surprised he had the dudes CD already. He goes, “I’ve had it for months. He was a cool looking black guy, and I had an extra 17 bucks in my pocket. I have to take a shot every Tuesday.”

I became a Mcknight guy instantly. His voice is a powerful reminder of my twenties. Russ struggled with Brian. He felt Mcknight’s songs lacked the structure of the traditional 1990’s sound he was used to. Riggs cared for Jon Secada more than I did. He would say, “your Secada is my Mcknight.”

In the fall of 1994, our buddy Jason Paisola simply mentioned he was digging Mcknight over Boyz 11 Men. I thought Rusty’s head was going to explode. I would push the first album on him a bit. I can hear Russ saying, “he obviously has talent, he’s just got a whiny voice.”

We went back and forth on this for nearly three years.

THE THINGS THAT STARTED TO SOFTEN RIGGS UP

There were some bridges put in place, that set Russ up for a change of heart.

Mcknight sang on Boyz 11 Men’s Christmas album. “Let It Snow” was well received by Riggs. If Brian was hanging with these guys? This was huge!

He thought the duet “Love Is“, with Vanessa Williams was solid.

The one line he spit in a song called “U Will Know” impressed Russ.

Mcknights second album was called “I Remember You.” While it was a six foot poster on my wall (not bragging btw), Rusty actually “liked” this CD. He claimed, “at least it’s somewhat radio friendly.”

What finally pushed Riggs into being a follower of Mcknight was the hit “Crazy Love.” It was written by Van Morrison years earlier. He said, “Finally. He must have hired Boyz 11 Men or Shai to start writing his songs.”

THE CHANGE OF MIND WAS COMPLETE

Brian Mcknight’s jams were now a regular part of his jeep rides.

“Show Me The Way Back To Your Heart“

He thought “Win” was a song worth modeling his life around.

Brian created a holiday song with his two young sons. Riggs thought “It’s All About Love” was “just great.”

Riggs top choice of all may have been “Back At One.”

If this seems like a lot of specific information about a random topic, it is. This is how Russ was. He enjoyed specifics inside his passions. These songs were more than sounds. They were like his friends.

Rusty was late on Mcknight. It makes me wonder why I didn’t give him more crap for it?

Then I remember that I saw Brian perform in the year 2000. I went with Russ and his wife Ruth. It was an intimate concert. Sitting in the 19th row I thought, “Riggs is a bigger fan than I am now.”

Listening to this music, is not a must for his children.

I want them to know it was more than music to their Father.

This was Russ Riggs path to loving Brian Mcknight.

One thought on “RUSS RIGGS PATH TO LOVING BRIAN MCKNIGHT”